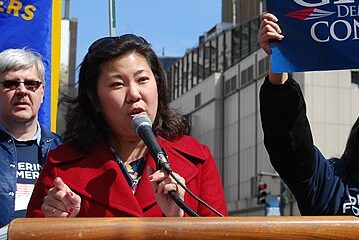 In November, the CAPAC sent a letter to Biden and his team asking for AAPI representation in his cabinet. They stated that they would like to see at least 7 percent of the White House Cabinet and other appointed personnel be AAPI, according to Vox.

Biden and his team have stated that they intend to build an Administration that “looks like America.” He has nominated one Asian American to his Cabinet so far. If confirmed, Indian American Neera Tanden will serve as director of the Office of Management and Budget.

Nearly a dozen members of CAPAC met with Biden through a virtual video call on Monday, according to The Washington Post. Lawmakers told Biden they were hurt that, despite the strong AAPI turnout for Biden in November’s election, there may be little to no AAPI representation in senior levels of Cabinet.

According to The Washington Post, the tone of the meeting was polite but many lawmakers left the conversation disappointed with the responses from Biden’s team.

“It is vital that those in the highest positions in the executive branch of government reflect the great diversity of our nation, and that includes the selection of AAPIs for Cabinet positions,” Rep. Grace Meng (D-NY), the first vice chair of CAPAC, told Vox in a statement. “The Biden administration should not go backwards. It should be more diverse and inclusive than past administrations, not less.”

Biden still has several positions to announce, but so far Tanden is his only AAPI nominee. Tanden’s nomination has also been met with pushback from Senate Republicans, leaving some AAPI lawmakers worried that there may be no AAPI representation in Biden’s cabinet.